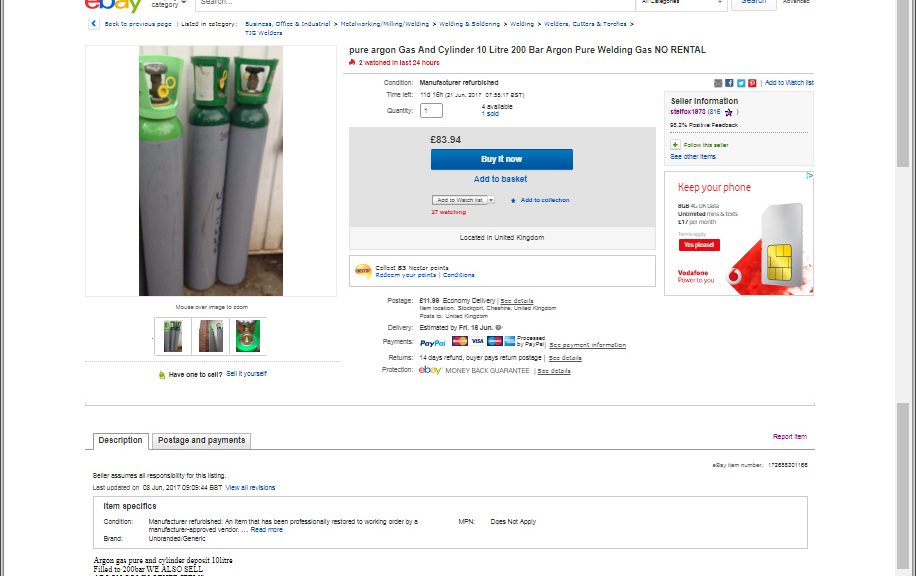 So as you probably know by now know I take quite an interest in the actual techniques scammers use in their various endeavours. Systems like ebay and amazon go to quite some lengths to prevent scammers but I find it fascinating how some still manage to sneak through. 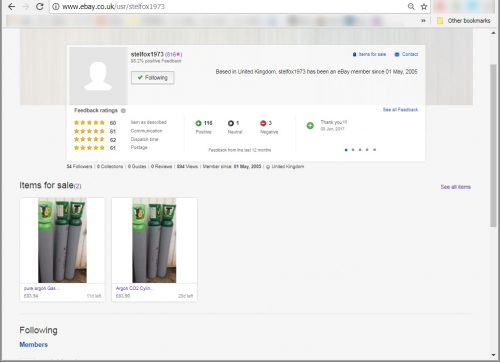 Ok so Michael sells gas for welding from an ordinary home in Sale, in the greater Manchester area: 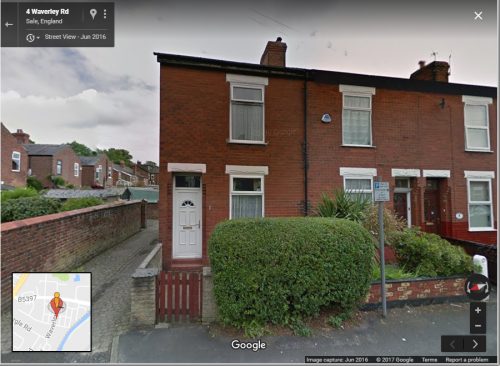 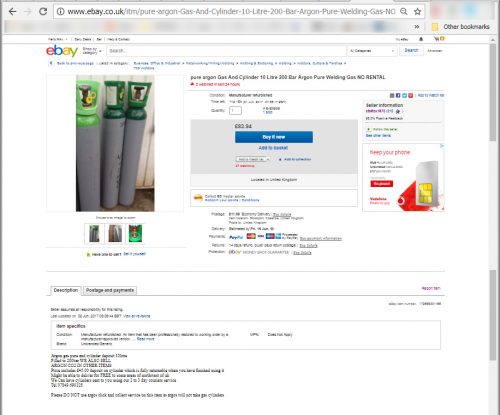 When you buy welding gas in cylinders, you normally pay a deposit for the cylinder. Sometimes there’s a rental fee instead but deposit seems to be most common. When you’ve used the gas you bring the cylinder back and get your deposit back (assuming you bring the receipt etc to show it’s not a stolen cylinder).

So as you can see there’s nothing unusual about this so far – he’s charging a deposit and says you’ll get it back when you return the cylinder. Fair enough.

So you buy the cylinder, which duly arrives by courier, and you get welding. Happy days. All is well and you leave positive feedback for the sale.

Fast forward a few months (or weeks, depending on how much welding you do) and you want to get a refill. 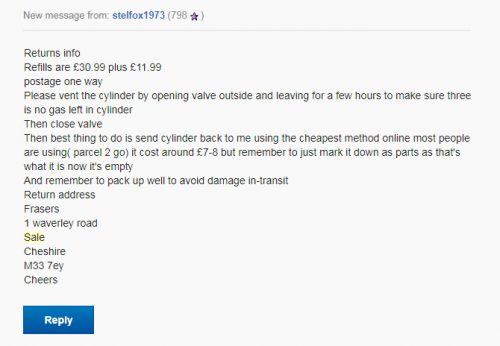 Or perhaps you realise that posting gas cylinders back and forth isn’t really a long term plan and you ask to return the cylinder and get the deposit back instead: 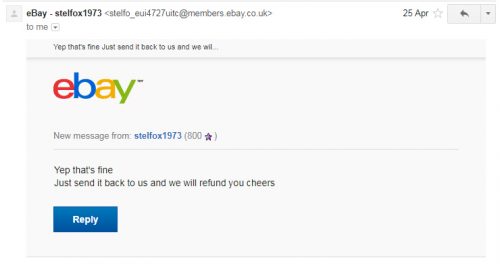 so you send another email…

So you try the mobile number shown in the ebay listing (07849 690128) and it just goes through to voicemail. You leave a message, maybe send a follow-up SMS just in case.

It’s at this point you start to realise you’ve been scammed for the £45 deposit.

So by now he has the cylinder back (courier can confirm it was signed for), you’ve left positive feedback on ebay already, and the paypal dispute period has elapsed. You literally have no recourse.

The clever bit is that because of the time it takes to use the gas, by the time you find out you’ve been scammed, all the usual protection mechanisms ebay offers are no longer an option. So he continues to make sales, continues to get good feedback, and each time, gets the cylinder back and doesn’t need to refund you the deposit.

By then the paypal 60-day dispute period is up, feedback has been left and you have no leg to stand on.

But surely ebay don’t stand for this sort of thing?

Well in theory, yes of course, their official stance is that they don’t allow fraudulent listings, but their actions tell another story. 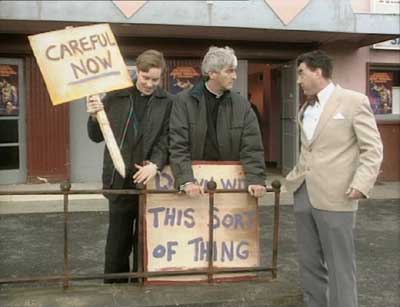 After all – each time Mr Fraser sells a cylinder on ebay, he makes money and ebay make money, so really how hard do you think they’re going to try to shut this down? Right.

Either way – you figure it’s worth trying to talk to the “Trust and Safety” department of ebay, and when you finally managed to get a call back (you have to say it’s for something else otherwise you don’t even get an option of contacting), you got to speak to a person and got them to transfer you to the Trust and Safety dept.

You explain your story and they confirm that indeed this is not acceptable behaviour from the seller, and also confirm that there have been other complaints made against this seller…so the chances are this is not just a one-off “got lost in the post” type scenario. This is an ongoing scam.

Ebay assure you that they’ll look into it and take appropriate action. Having heard that there’s other complaints been made gives you a vague notion that something might actually happen – e.g. account suspension or termination.

You don’t hear anything back so a couple of weeks later you wangle your way through the ebay phone system yet again and talk to someone to follow-up. They confirm that “it is being investigated” and send you a nice confirmation email to that effect.

That email was from the 12th April, it’s now almost 2 months later (June at the time of posting), and Mr Stelfox1973 is still selling welding gas on ebay – same listings, same scam, no action from ebay.

Cool little scam though isn’t it? Not so cool that this so-and-so is conning people and abusing ebay’s system, but still interesting from an analytical perspective.

Is there any recourse?

I think the only real course of action is to go small claims court. You have the name and address,  a summons would certainly get attention, but you’re basically having to risk yet more money to *maybe* get a result (or more likely not). Plus someone who’s such a weasel to be pulling a scam like this will almost certainly try and wriggle out of any sort of settlement.

My hope is that one of these days he’ll piss the wrong person off and they’ll pay him a little visit in person.

And to that person I say *thank you* from all of us who’ve been scammed by Mr Fraser.

People often say I’m too cynical when it comes to stuff like this. But I find if you look at people’s motivations that’s normally consistent with their actions.

Of course Ebay have to BE SEEN to be tough on scammers, but while they and Mr Fraser are both making money I think it’s unlikely they’d do anything much about it (as evidenced by the fact that this scam is still ongoing months later).

Out of curiosity I also spoke to the courier handling company (Parcel2go.com) and pointed out that the large gas-cylinder-shaped parcels they’re picking up and delivering from that address, labelled as “parts” are actually compressed gas cylinders which are (repeated) violations of their prohibited items list. But they too didn’t really seem fussed.

Again, as long as they’re making money why should they care. If a cylinder pops off and injures one of their drivers, who gives a shit really..they’re only freelancers, right?